Published by Emma Lee-Potter in on Friday 16th November 2018 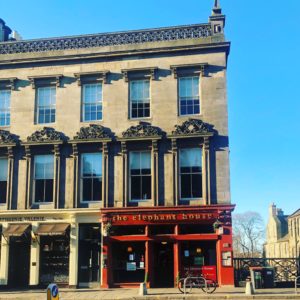 It felt strange to be sitting in a café overlooking Edinburgh Castle as this week’s Brexit dramas unfolded in London.

During my reporting years I would have been in the thick of it, notebook in hand, waiting for the key players to emerge from meeting rooms and discussions.

Yet this week I was miles from the drama, happily sipping a flat white in The Elephant House, one of the Edinburgh cafes where JK Rowling wrote Harry Potter and the Philosopher’s Stone.

The café was doing brisk business but locals told me that in summer the queues stretch down the pavement. It’s become a key landmark for Harry Potter fans and I wanted to see it for myself, from the JK Rowling newspaper cuttings and pictures on the walls to the Harry Potter graffiti in the ladies’ loos.

As a parent I spent hours queuing with my children to buy each new Harry Potter book when it was published on the stroke of midnight. I always bought three copies – one for my daughter, one for my son and yes, one for me. Interestingly, when I visited a school last month the head of sport had recently given an assembly about his memories of excitedly waiting to buy the latest Harry Potter. The children were astonished – they couldn’t get their heads round the idea that in years gone by everyone had to wait for the next story.

The Elephant House staff were delightful. They must be sick and tired of being asked which table the great JK sat at but they didn’t show it. The answer is that she didn’t have a regular haunt. She simply sat at whichever table was free – and wrote and wrote and wrote.

“That’s the worst film I’ve ever seen.” Those were my husband’s words as we staggered out of a preview screening of The Girl in the Spider’s Web this week.

The film is the next instalment in the Millennium series and stars Claire Foy as the feminist vigilante Lisbeth Salander. The character is just about as far removed from her role as The Queen in The Crown as she could possibly get. Foy has had her hair shorn, sports a vast dragon tattoo on her back and spends much of the movie in motorbike leathers, racing through Stockholm at death-defying speeds.

I didn’t loathe the film as much as my husband but I was stunned by the violence. The movie is rated 15 but it was way too much for me. Call me a wimp but I’ve made a mental note not to see an 18 film any time soon. In fact I should probably stick to U or PG.

Former Dire Straits stuntman Mark Knopfler gave an interview to The Sunday Times last week. The aim was to promote his new album, Down the Road Wherever, but I was more fascinated by his days as a reporter on the Yorkshire Evening Post and how his newspaper training helped his songwriting. “It teaches you to get yourself organised, and to have a beginning, a middle and an end,” he said. “It gives a kid a real crash course in society and how it works. I had no clue. ‘OK, this is called an inquest.’ What’s that?”

I feel exactly the same about my newspaper training. My two years in local newspapers at the start of my career taught me everything I know, from court reporting to interviewing tricky people. When I wrote my textbook for journalism students and trainees last year I returned again and again to the lessons I learned back then. It was utterly invaluable. Local papers are in dire straits these days but I wish all young reporters learned their journalistic skills this way.