Published by Emma Lee-Potter in on Friday 26th October 2018 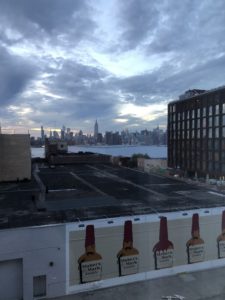 “Have you ever stayed at a Hoxton before?” asked the charming hotel receptionist.

“I’ve stayed at all of them,” I said proudly, sounding like a middle-aged Hoxton groupie.

We’d just arrived at the Hoxton’s first US outpost – in the chic neighbourhood of Williamsburg, Brooklyn. Actually, I won’t be able to keep my record of staying in every Hoxton for long because the hotel group is expanding rapidly. To date it has hotels in Shoreditch, Holborn, Amsterdam, Paris and New York (yes, I’ve now stayed at all five). But the next hotel, in Portland, Oregon, opens very soon and will be followed by Chicago, Los Angeles and Southwark next year.

I booked a three-night stay at the Hoxton in Williamsburg as soon as I heard about it and had been counting the days till my visit. All I can say is that it definitely lived up to my (very high) expectations. The hotel opened in September 2018 and has been full every night since.

The real wow factor at the Hoxton Williamsburg is the setting. When I opened the door to our room I gasped at the view across the East River to the Manhattan skyline. For goodness’ sake, I could even see the Empire State Building. In fact the only problem was pulling myself together and dragging myself away from that view. I could easily have spent three days gawping at it.

In common with the other Hoxtons, this one has a fascinating history. It’s a nine-storey new build on the site of the former Rosenwach factory, which made the iconic wooden water towers dotted around New York. Two of the original walls remain and the factory’s old carriage house has been reconstructed to form the hotel’s vast restaurant.

One of the best things about staying at any Hoxton for the first time is that you don’t have that niggling worry that you might not like it. You know you will. The 175 bedrooms at the Hoxton Williamsburg are stylish and well-equipped and the hotel décor is stunning. The ground floor is a bit like a cool club, with comfy sofas and armchairs, great art and waiting staff at the ready to serve you a flat white or a glass of wine whenever you want it. The only problem is that word has clearly got around and the place is always full. We had dinner at Klein’s restaurant the first night because we were tired and jetlagged and it was so good that we had to give ourselves a stern talking-to and make ourselves go out the next night.

I love Brooklyn so it was a treat to have that on the doorstep but I hadn’t realised how easy it would be to get to Manhattan. It’s an eight-minute walk from the Hoxton to the North Williamsburg ferry stop and from there you can catch the NYC ferry across the East River and be on 34th Street in 15 minutes. If I lived in Williamsburg I’d commute to work that way. Even on a blustery autumn day it was a treat to sit on the top deck, sip coffee (you can buy that on the ferry too) and gaze in wonder at Manhattan.

Looking back, the only downside of this trip was having to leave. I can’t think of anything about the Hoxton Williamsburg that I didn’t like.