Published by Emma Lee-Potter in on Friday 25th October 2013 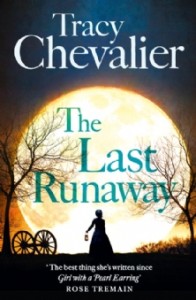 Tracy Chevalier made her name with her second novel, the best-selling Girl with a Pearl Earring. The story of a young maid who became the muse of the 17th century Dutch artist Vermeer, it went on to sell four million copies worldwide and was made into a film starring Scarlett Johansson and Colin Firth.

I’ve been captivated by Chevalier’s books for years – not just by the quality of her writing but by the way in which she evokes time and place. When I reviewed Burning Bright, her novel set in 18th century London, I remarked how I could “almost smell the smoke and mildewed clothes, see the gaunt, pock-marked faces of people struggling to survive and sense Jem’s wonder as he gazes across the vast, murky Thames to a perplexing world.”

Chevalier’s new novel, The Last Runaway, transported me equally memorably to an entirely different world. This time round she has set her book during the last days of slavery in Ohio, but yet again she made me feel as though I was right there. I could feel the relentless sun beating down on the cornfields, sense the fear of runaway slaves hiding in the woods and picture the Quaker women stitching patchwork quilts on their front porches.

The book tells the story of modest Quaker girl Honor Bright, who leaves 1850s Dorset for a new life in America. Her sister Grace has agreed to marry an older man who’s emigrated to Ohio and after being jilted Honor rashly decides to go with her.

But tragedy strikes en route and Honor arrives in Ohio alone. Vulnerable and bemused by the strangeness of her new environment, she finds herself utterly dependent on the kindness of strangers, especially a tough, straight-talking milliner who takes her under her wing.

Not everyone is so welcoming though. Honor is confused by the fact that although the local Quaker community opposes slavery in principle, they aren’t prepared to support her in hiding runaway slaves. Quite the contrary. She’s warned time and time again not to get involved.

Once again Chevalier has written a remarkable book. The Last Runaway is powerful, evocative and impeccably researched. In her acknowledgements, the writer reveals that she even learned to make quilts herself whilst working on the novel. How impressive is that?