Published by Emma Lee-Potter in on Tuesday 23rd April 2013 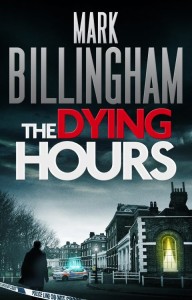 The first crime novel I ever read was Murder at the Vicarage by Agatha Christie. From then on I stoically worked my way through all her Miss Marple stories, from The Body in the Library to the 4.50 from Paddington. Me and my mum were such fans that we used to go and see drama adaptations of Christie novels at the Playhouse in Bournemouth on Saturday afternoons.

But after a while my enthusiasm for crime fiction waned. Until about four years ago, when I discovered the likes of Nicci French, Mark Billingham,  Sophie Hannah and Lynda La Plante. Although I hate blood and gore I began reading crime novels with relish. My absolute favourites, though, are Kate Atkinson’s Jackson Brodie books. They are stunningly written, pacy stories, with a flawed, cynical ex-cop as the hero. There have been four Jackson Brodie books so far (they’ve also been dramatised by the BBC, with Jason Isaacs in the title role) and I can’t WAIT for the fifth. If you haven’t discovered them yet, the first is Case Histories – and it’s wonderful.

I’m so intrigued by crime fiction these days that when I spotted that crime writers Mark Billingham, Val McDermid and Stuart MacBride were appearing at the Chipping Norton Literary Festival I immediately signed up. And what a treat it was. Entitled Getting Away with Murder, the event featured the trio, all with a beer, discussing everything from the first crime novels they read to the secrets of their own success.

McDermid is an ex-journalist. She was a Mirror Group Newspapers trainee (me too!) and cut her teeth working on local newspapers in Devon and Cornwall. She later became a crime reporter and northern bureau chief for the Sunday People before turning to crime fiction and quitting the newspaper world in 1991.

McDermid wrote her first novel in her early twenties but said that after sending it to every publishing house “I got it back by return of post.” But someone suggested she should adapt it as a play so she took all the description out, kept all the dialogue and hey presto, she was a playwright at the age of 23. “But I couldn’t replicate it because I didn’t know how I’d done it,” she told the Chipping Norton audience. Well, she certainly does now. She’s a top ten bestseller. Her books have been translated into more than 30 languages, with more than two million copies sold in the UK and 10 million worldwide.

“I would say it’s character, plot and pace,” said Stuart MacBride, who writes the Logan McRae series, which are set in Aberdeen and, take it from me, are gripping, but scary. “It’s a balanced, rounded meal of those things. It’s not a packet of crisps. It’s sausage and mash.”

The trio all agreed that research is “a double-edged sword” and that writers can do too much of it. When a member of the audience asked about the “natural arc” of a crime novel, starting with the crime and ending with its resolution, Billingham quipped: “We still have to write the middle, you know. That’s the tricky bit.”

McDermid remarked that it’s important to “make each scene earn its keep” and yet maintain the momentum while MacBride observed that “it has to piece together. It has to make sense.” Billingham nodded sagely at his fellow writers. “The thing that drives me crazy is when the killer, someone you haven’t seen before, suddenly leaps out in chapter 48 and says ‘it was me…’ The killer has to be in plain sight all the way through.”