Published by Emma Lee-Potter in on Monday 28th April 2014 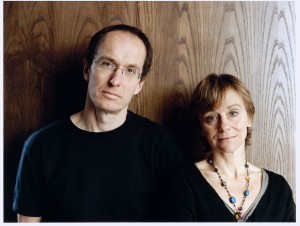 I’m so hooked on Nicci French’s addictive Frieda Klein series that the instant I realised that the fourth instalment was out I hotfooted it down to my local bookshop to buy it.

There was no question of waiting for the paperback – I had to read Thursday’s Children immediately (review to follow).

I had exactly the same response when I spotted that husband and wife writing duo Sean French and Nicci Gerrard  – aka Nicci French – were speaking at this year’s Chipping Norton Literary Festival. I booked a ticket months ago, so  yesterday I got up at dawn and drove to the Cotswolds through the lashing wind and rain. The authors were onstage at Chipping Norton’s small but perfectly formed theatre at 10am and I didn’t want miss a word of it.

The pair were interviewed by novelist Fanny Blake, who got right to the heart of how they write together. Along the way the pair revealed that they “love knowing what is inside people’s fridges,” reckon “thrillers are a wonderful way of exploring the way people live now” and that Nicci doesn’t like to be interrupted while she is working but “Sean loves to interrupt me.”

Both former journalists, they were successful novelists in their own right before they began writing together. They produced 13 Nicci French novels and then came up with Frieda Klein  – largely because “someone wrote a piece saying that the good thing about us is that we had never written a series.”

Interestingly, although they spend months working out their plots – “lots of arguing and talking together and planning” – they never sit down and write together. Sean works in a “very nice shed” in the garden of their house in Suffolk, while Nicci is “the mad woman in the attic.” One of them writes the first chapter, emails it to the other and then they pass the subsequent chapters back and forth between each other.

‘It’s quite an intimate and troubling experience,” Nicci told the audience. “You are trusting the other person to treat you gently and to have the best interests of the book at heart.”

Sean said that over the years “certain rules” had emerged in their writing – “two and a half of them,” he joked. They never tell a soul who wrote what in their books and there is no division of labour. “We both need to own it,” said Nicci, while Sean added: “Most other people who collaborate say that one writes the procedural stuff and the other does the emotional stuff. We have no division.”

They firmly believe that their way of writing a novel probably takes longer than other writers. Even so they once turned out a book in a couple of months, although a year is more usual.

They then chatted about the character of Frieda Klein – who is so complex that she definitely needs the eight books planned for the series. Solitary, prickly and self-contained, she works as a psychotherapist, walks the streets of London at night, drinks whisky and has a complicated family background. As I’ve said before, I’m utterly gripped…