Published by Emma Lee-Potter in on Friday 26th February 2016 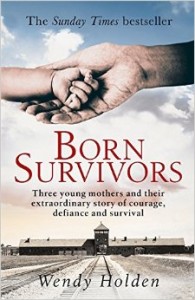 The most memorable hour of the week was spent listening to author Wendy Holden talk about her unforgettable book, Born Survivors.

Wendy, a close friend from our Evening Standard days, has written more than thirty books during her career but this one is special.

A harrowing account of bravery and love in the midst of unimaginable cruelty, Born Survivors tells the story of three young women sent to Auschwitz II-Birkenau in 1944.

They didn’t know each other but they were all newly pregnant and faced an uncertain fate without their husbands. Alone, terrified and bereft of many of their loved ones, Priska, Rachel and Anka knew that their only chance of saving their unborn babies from almost certain death was to hide their pregnancies from the Nazis.

The book follows their journey from Birkenau to a German slave labour camp and then on a 17-day train journey to the Mauthausen death camp in Austria. By this time they were weak, exhausted and emaciated from being almost worked to death and “forced to exist on between 150 and 300 calories daily with no iron or protein.”

One baby, Rachel’s son Mark, was born on the train to Mauthausen. As Wendy writes: “In that unspeakable squalor and with no sharp objects to hand, no one knew how to sever the umbilical cord that had connected the baby to his mother and kept him alive until then. Someone suggested Rachel bite through it. Eventually an SS guard handed the doctor a dirty razor blade.”

Sitting alongside Wendy this week was Eva Clarke, Anka’s daughter, who was born at Mauthausen. Speaking movingly and eloquently, Eva told the story of Anka’s life, from her comfortable upbringing in Czechoslovakia and her days as a law student at the University of Prague to the horrors of Auschwitz.

Wendy started writing Born Survivors in 2013. By a stroke of luck, she discovered that Eva lived in Cambridge, just over an hour away from her Suffolk home. When they met they “instantly connected” and have since become firm friends. Eva told her at that first meeting that up until 2010 she believed she was the only surviving baby to be born at Auschwitz but she had discovered two others – Mark, Rachel’s son, and Hana, Priska’s daughter.

“When I came across the story of babies born to the Holocaust by chance in 2013, Eva Clarke was my first point of contact,” Wendy writes in the book’s acknowledgements. “Back then, I thought that she might have been the only baby who had survived her mother’s particular Holocaust journey. The moment she told me of the existence of Hana and Mark and how they’d since become ‘siblings of the heart,’ I knew that I had to incorporate the stories of all three into one epic volume spanning more than a century. And so Born Survivors was conceived.”

The audience at the two women’s talk, held at Bournemouth Library as part of Jewish Book Week 2016, were clearly moved by everything they heard. One woman put her hand up at the end and said softly: “I feel truly privileged to have been here today.” She spoke for us all.