Published by Emma Lee-Potter in on Tuesday 1st November 2016 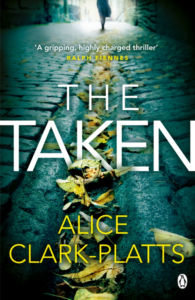 The Taken gripped me from start to finish. I felt bereft when I reached the last page of this excellently plotted and assured tale – but I was in for a pleasant surprise. Why? Because for some unknown reason I’d assumed this was Alice Clark-Platts’s first novel. In fact it’s the second of her series about Detective Inspector Erica Martin, a Durham police officer with a fierce intellect and a tangled love life. So the first thing I did on finishing The Taken was order its predecessor, Bitter Fruits.

But back to The Taken. Clark-Platts’s scenario is a good one, focusing on Tristan Snow, a sinister pastor who claims to be able to heal the sick and fills theatres up and down the country with followers who hang on his every word. Not everyone is convinced by him though. In fact someone hates him enough to murder him as he prays at the Durham bed and breakfast where he’s staying with his family. Oddly, the murderer leaves a dead pigeon under the bed of the dying man, its significance unknown.

As DI Martin investigates the killing she realises that Tristan Snow’s family is dysfunctional to say the least. Violet Snow, his teenage daughter, seems unsurprised by his murder, Sera Snow, his wife, is inscrutable and barely utters a word, Antonia Snow, Sera’s sister, says her brother-in-law was “a big fat pig” who deserved to die and Fraser Mackenzie, his manager and friend, is hiding his own dark secrets.

Clark-Platts clearly knows the cathedral city of Durham well. She was a student at the University of Durham and her descriptions of the place are utterly authentic. A former human rights lawyer, she now lives in Singapore with her family and it was there that she embarked on the Curtis Brown Creative online writing course. Interviewed about the course a while back she spoke about what she had learned.

“We were told to hit the reader immediately with our characters and plot,” she said. “Much harder than it seems.” I’d say that she’s succeeded brilliantly.