Published by Emma Lee-Potter in on Saturday 14th May 2016 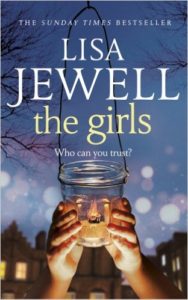 I’ve been a fan of Lisa Jewell’s books for as long as I can remember.

I read her first novel, Ralph’s Party, after the high-brow poet and academic Tom Paulin reviewed it on Newsnight Review in 1999. He unexpectedly declared that Ralph’s Party was “a breath of fresh air,” even though I’m sure it wasn’t his usual reading fare.

The Girls is Jewell’s 13th novel and it’s a stunning read, one of her best.

The book is set in a communal garden square in London, where the neighbours live cheek by jowl and children of all ages run in and out of each other’s houses.

In the space of a few pages I felt as if I’d known the characters all their lives – Adele, the generous-spirited earth mother who’s home schooling her three daughters, Leo, her charismatic yet secretive husband, and Clare, the fragile mother of two who moves to one of the garden flats after her previous house is razed to the ground by her mentally ill husband.

If communal living sounds idyllic, it definitely isn’t. The pretty illustration of Virginia Crescent at the front of the book, with its elegant houses, playground and rose garden, belies its dark tone.

The setting for The Girls was inspired by the communal garden where Jewell and her family live but as she has admitted in an interview: “It wasn’t until my children were much older and starting to become independent in the garden that I realised there was a different kind of story to be told: the flipside of all that freedom, the running in and out of other people’s houses, the close-knit community – the story of the worst-case scenario.”

My favourite characters in the novel are 12-year-old Pip, Clare’s daughter, whose letters to her imprisoned father are wise, perceptive, heartbreakingly honest and sad, and Leo’s ghastly father Gordon, who’s living with his son and long suffering daughter-in-law while he convalesces from having his “rotten to the core” foot amputated.

Jewell is on top form in The Girls and I hope she’ll return once more to the theme of teenagers, freedom and keeping them safe in a scary world.