Published by Emma Lee-Potter in on Thursday 12th March 2020 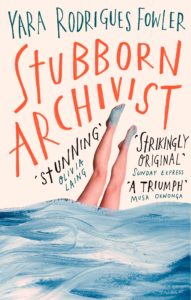 Stubborn Archivist is one of the most original novels I’ve read in a long time. Told in an eclectic mix of prose, dialogue, poetry, lists and snatches of Portuguese, it’s ambitious to say the least. However, this tender portrait of a young girl growing up between two cultures is a triumph – and highly readable at that.

Yara Rodrigues Fowler grew up in a Brazilian British household herself and she’s chosen the subject of mixed identity for her debut novel.

The girl at the heart of Stubborn Archivist (we’re never told her name) is the daughter of a Brazilian mother and a British father, both doctors and living in a rambling house in south London. She visits Brazil every year for holidays, travelling with her parents as a child and later taking solo trips to see her beloved grandparents. Rodrigues Fowler is brilliant at portraying the way in which the girl experiences a “shifting” as she leaves “the last of the cold English air” behind and flies over “the big open bellied loneliness of the Atlantic” to Brazil. Her fellow passengers shed their fleeces and swap English for Portuguese, while little children cry out for “mumae” and “papai”.

There’s so much to like about this novel. The casual way people ask the girl, who’s lived in Tooting all her life, “when did you move to London?” The fact that she has spent 20 years of her life having to spell out her foreign-sounding name and email to English people, “steeling herself for the relief of the @”. Her observation that even the fruits she eats have been living “double named double lives” – “one soft and wet and café da manhã,” “the other shrivel sour and in Sainsbury’s”. Her job as a TV researcher, compiling background for programmes about Brazil, or more to the point, a stereotypical view of Brazil, complete with plastic surgery, girls in bikinis and beach volleyball.

It’s easy to be put off the idea of experimental writing but in this case it really works. Stubborn Archivist is a wonderful book, one to return to again and again. It’s already garnered a host of praise – and justifiably so. Rodrigues Fowler was shortlisted for The Sunday Times Young Writer of the Year Award in 2019 and her novel has been longlisted for the Swansea University Dylan Thomas Prize 2020, the world’s largest literary prize for young writers.

PS Thank you very much to Martina Ticic of Midas PR for asking me to take part in the @dylanthomprizeblog tour.