Published by Emma Lee-Potter in on Wednesday 7th November 2018 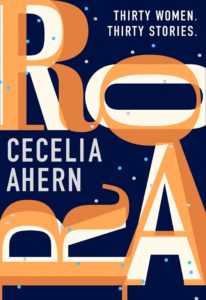 I’ve been an admirer of Cecelia Ahern for years. She wrote her first novel, the bestselling PS, I Love You, at the tender age of 21, and in the intervening years she has published 14 more. In the process she’s sold 25 million books worldwide and has been published in more than 40 countries. Pretty impressive for a woman who’s still in her 30s.

When I heard Ahern speak at a Grazia event in 2014 I remarked that she was “surprisingly self-deprecating for a writer who gets better and better with every book”.

Four years on, she was interviewed on BBC Radio 4’s Front Row to publicise her new book, Roar, and once again she sounded remarkably unfull of herself. She’s also incredibly versatile. She could so easily have stuck to the relative safety of romantic fiction but she hasn’t. Instead, she’s constantly tackled new subjects and themes. In recent years she’s written two Young Adult novels and now she’s turned her hand to a collection of short stories.

HarperCollins, the publisher of Roar, kindly sent me an advance copy to review and it’s been a treat to read it. The book features 30 short stories, all titled The Woman Who… and all focusing on a particular facet of women’s lives.

Each stand-alone story is fresh, witty, sharply observed – and utterly original. As Ahern herself says: “These women are relatable, and their conflicts are real.” They cover a whole gamut of women’s emotions, from feeling ignored by their husbands and partners to guilt about work and childcare, yet all end on a positive note as each character realises that she alone has the power to make changes in her life.

It’s hard to pick a favourite but I particularly enjoyed The Woman Who Was Swallowed Up by the Floor and Who Met Lots of Other Women Down There Too. Everyone will identify with that awful moment when you clock that you’ve done something deeply embarrassing, whether it’s walking down the street with your skirt tucked into your knickers or making a mess of a work presentation. There are plenty of funnier ones in this astute story but I won’t spoil the surprise.

All in all, Roar is a joy to read and I’m not surprised in the least that Nicole Kidman wants to produce a TV series based on the stories.