Published by Emma Lee-Potter in on Friday 9th September 2016 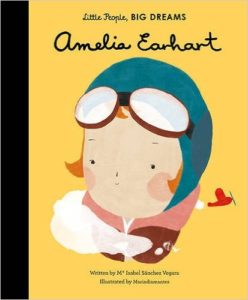 I’m a big fan of World Book Day but it was always a bit of a trial when my son was small.

Like most schools in the country, the one he attended asked all the children to dress up as a famous literary character on the day – much to the delight of every child except one. My son.

As all the others trooped into class dressed up as Harry Potter, Hermione Grainger and Winnie-the-Pooh, my son point-blank refused to dress up.

Until I had a brainwave. He was obsessed with adventure stories and inspired by the Biggles stories, reluctantly agreed to dress up as a pilot. I managed to track down a miniature flying suit, borrowed a flying helmet and goggles and hey presto, he was Biggles. Phew!

I remembered that episode when a stunning new children’s book arrived in the post this week. Amelia Earhart is just the sort of book he and his friends would have adored when they were little. Part of a new series called Little People, Big Dreams (I’m not entirely convinced by the title), the collection relates the stories of famous women who achieved remarkable things.

Amelia Earhart is a real life story that will fascinate primary school-aged children. Beautifully illustrated, it relates how she was the first woman to fly to 14,000 feet and later became the first female pilot to fly solo across the Atlantic. The theme of the book is that “if you want to do something, do it”, which I thoroughly approve of. Not only that, the book includes a time-line of Earhart’s life, suggested further reading and details of the Amelia Earhart Museum in Kansas.

If flying doesn’t appeal to your children, other titles in the series focus on the writer Maya Angelou, the fashion designer Coco Chanel and the artist Frida Kahlo.