Published by Emma Lee-Potter in on Tuesday 4th July 2017 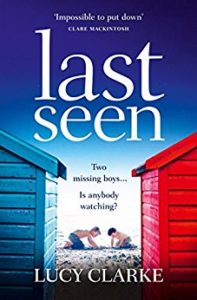 Lucy Clarke is fast becoming a writer to watch. Last Seen, her fourth novel, is set on a remote coastline dotted with beach huts so I was entranced by the location before I even got into the story.

Clarke writes brilliantly about the sea – hardly surprising since she spent her childhood holidays living in a beach hut, is married to a professional windsurfer and now lives on the south coast of England.

As Clarke explains in a Q&A at the end of the novel: “I liked the idea of exploring how this idyllic, peaceful setting could hold a darker edge. There’s an intensity to summers when you’re living in such close quarters – particularly as most beach hutters have owned their huts for years, so there are layers of history locked within the community.”

Clarke uses every ounce of her seaside knowledge and writing flair in this novel. It’s the story of two friends, Sarah and Isla, and their two sons, Marley and Jacob, who spend their summers in adjacent beach huts. The two women’s lives are intertwined on many levels but everything changes when the two boys, just ten-years-old, set off on a swim and – only one returns. Seven years later, on the anniversary of the accident, the other boy, now a strapping teenager, disappears without trace too.

Last Seen is a compelling and intriguing read. At times I got slightly muddled by the lesser characters in the beach hut community but Clarke layers on twist after twist, all of them convincing, into the narrative. She’s particularly good on teenagers and on the constantly evolving nature of friendship. In short, I couldn’t put this novel down, reading into the early hours of the morning because I couldn’t bear to stop.