Anya Hindmarch and the art of the apostrophe

Published by Emma Lee-Potter in on Tuesday 15th November 2011 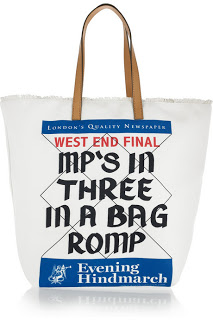 During my short-lived teaching career I was taken aback by my students’ poor grasp of basic grammar. Many of them avoided capital letters like the plague, used commas instead of full-stops and as for semi-colons, well, forget it.

So maybe St Paul’s School for Girls, one of the most successful schools in the country, is on to something with its decision to run traditional grammar lessons for pupils aged 11 to 14.

“You would think that we might be attracting pupils who already have a pretty strong command of English grammar given that we’re very strong academically and that we expect a very high standard from the pupils that we test for admission,” headmistress Clarissa Farr told the Daily Telegraph.

“However, the reality is that a lot of our students don’t even have a basic command, as we would see it, of the rules of conventional grammar when they arrive.”

I don’t know what she’d think of the bag above. I’m a huge fan of Anya Hindmarch, who’s a brilliant businesswoman and fantastic designer. But I nearly fell off my chair yesterday when I spotted this £165 Anya Hindmarch bag on the Net-a-Porter site.

I reckon that whoever came up with that slogan should sign up for a grammar lesson immediately. Urgent apostrophe classes needed.