Published by Emma Lee-Potter in on Thursday 27th September 2012 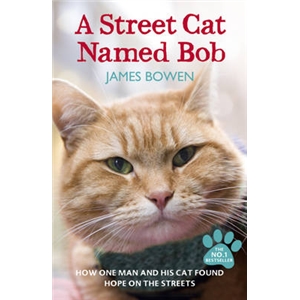 If you’re fed up with the lashing rain or feeling sad about your empty nest (sob), then I’ve just discovered the perfect book to restore your spirits.

You may have heard of James Bowen and his adorable ginger cat Bob already. The pair are a big hit on YouTube, have appeared on Radio 4’s Saturday Live and have been profiled by loads of newspapers. Bob is probably the most famous cat in London.

Now James’s book about how he and Bob found each other is out in paperback and it’s the most uplifting story I’ve read in ages. Subtitled How One Man and His Cat Found Hope on the Streets, it’s a special book – even for people like me who haven’t even got a cat. I tore through A Street Cat Named Bob in a few hours and it cheered me up no end as I sat in a claustrophobic Oxford waiting room.

The tale began in 2007, when James found an injured stray tom curled up on a doormat in the hallway of his block of flats in Tottenham, north London.

For days James resisted the temptation to take the green-eyed cat home with him. As he says: “…the last thing I needed right now was the extra responsibility of a cat. I was a failed musician and recovering drug addict living a hand-to-mouth existence in sheltered accommodation. Taking responsibility for myself was hard enough.”

But eventually he gave in and gave the cat a home. He named him Bob, after a character in Twin Peaks, lovingly nursed him back to health and even took him busking. The pair were soon inseparable and became a familiar sight around the streets of Covent Garden and Islington. Sometimes Bob pads alongside James on a lead, sometimes he drapes himself across James’s shoulders.

In one interview James said that Bob had saved his life. At the time he thought his remark was a bit “crass” but in the book he admits that the cat really did transform everything. Bob  helped him get his life back on track and as he declares in his acknowledgements: “Everyone deserves a friend like Bob. I have been very fortunate indeed to have found one…”

PS. James is currently working on a children’s edition of his book. Bob: No Ordinary Cat is due out in the spring.